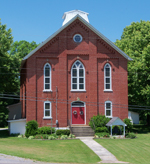 He was born in Huntingdon, son of the late Roy Adam and Mabel Ann (Yocum) Eastep.  On October 11, 1947 he married Grace Ivalue Weitzel in Cumberland, MD.  She preceded him in death on March 3, 1998.

Bob was preceded in death by his wife, Grace after 50 years, 4months and 21 days of marriage; a grandson, Rick Raymond Eastep; and a sister, Betty Jean Kaurudar.

Bob was a lifetime dairy farmer along Clover Creek that loved serving his Lord, farming, spending time with his family and serving his community.

At the request of the deceased all services will private. Interment will be held at St. John’s Lutheran Cemetery, rural Williamsburg.  Arrangements are by John K. Bolger Funeral Home Inc., Williamsburg.

In lieu of flowers, memorial contributions in Bob’s memory may be given to St. John’s Lutheran Cemetery, 219 Plum St., Williamsburg, PA 16693.