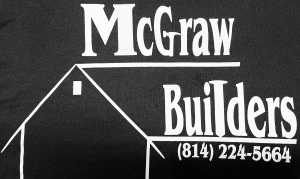 Richard K. “Dick” McGraw, 79, of Martinsburg, went home to be with the Lord, Monday morning, June 20, 2022 at Homewood at Martinsburg.

He was born in Roaring Spring, son of the late Richard A. and Lovern I. (Peck) McGraw.  On February 22, 1964 he married Kay L. Robeson at the St. Matthew Lutheran Church, Martinsburg.

Dick was a 1960 graduate of Morrison Cove High School, Martinsburg and a member of St. Matthew Lutheran Church in Martinsburg.  He was also an auxiliary member of the D. Merl Tipton V.F.W. Post 43, Martinsburg and Bonner-Sollenberger American Legion Post 456, Williamsburg.

He was a master carpenter, who owned and operated McGraw Builders for over 35 years.  Dick began his career working for his father and grandfather and in 2006, retired leaving the business to his son, Keith, who became the fifth generation of McGraw’s to build in the cove.

Friends will be received from 10am until noon, Wednesday, June 29, 2022 at St. Matthew Lutheran Church, Martinsburg, where a funeral service will follow at noon, Pastor Traci Marriott officiating.  Interment will be held at Fairview Cemetery, Martinsburg.  Arrangements are by John K. Bolger Funeral Home Inc., Martinsburg.

In lieu of flowers, memorial contributions may be given to Juvenile Diabetes Research Foundation (JDRF), P.O. Box 37920, Boone, IA 50037 or www.jdrf.org/donate

To send flowers to the family or plant a tree in memory of Richard K. "Dick" McGraw, please visit our floral store.

A Memorial Tree was planted for Richard K. "Dick"