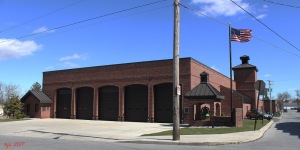 Richard Frank Snively, 78, formely of Gettysburg and a resident of McArthur Hall at the Hollidaysburg Veterans Home for the last two years, passed away suddenly Tuesday afternoon, June 15, 2021, at UPMC Altoona.

He was born in Schellsburg, the son of William Sewell and Mary Fannie (Zimmers) Snively.

He is survived by his brother, Leroy E. Snively and wife Pam of Gahanna, OH, and many nieces and nephews. He was preceded in death by his parents, two sisters and five brothers.

Richard was a former member of St. James Lutheran Church (Evangelical Lutheran Church of America) in Gettysburg. He was a veteran of the Vietnam War, stationed in Korea, and retired from serving with the Army Reserves and also working for the federal government.

He was most proud of his 43 years of service as a volunteer fireman with the Gettysburg Fire Department, and served as Fireman's Association of PA president from 2012-2013. He often talked about his involvement with Civil War re-enactments and the Carnival held there.

A funeral service with military honors will be held 11:00 am, Tuesday, September 7, 2021, at Indiantown Gap National Cemetery, Annville, PA. Inurnment will follow at the cemetery columbarium.

We would like to give a special thanks to the staff and residents of MacArthur Hall and the Veterans Home for their support and care these past two years; Betty Ann (Kevin) Quinn, Carolyn (Willard) Doric and Andy Snively for keeping in touch and visiting Richard on many occasions; Pastor Mike and Pastor Andrew at St. James Lutheran Church for their care and support; and Stan Clark at the Adams County Veteran Affairs for telling us about the Veterans Home facility in Hollidaysburg. We also want to thank Brad and Toni Felix at the Legion, Bill Dempsey at the Fire Hall, Dr. Kelly and his staff, and the staff at the hospital and rehabilitation facility for all of their help when Richard became ill two years ago. Lee and Pam Snively also want to thank Ronald W. Brubaker from John K. Bolger Funeral Home Inc., for helping with all of Richard's arrangements. He went out of his way to help us during this time.

To send sympathy gifts to the family or plant a tree in memory of Richard Frank Snively, please visit our tribute store.