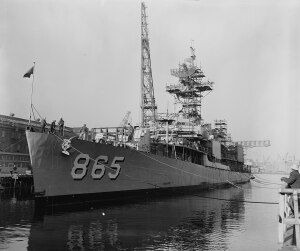 He was born in Altoona, son of the late George W.J. and Ruth Elizabeth (Bird) Bookhammer.

Surviving are a daughter, Virginia “Jenny” Bookhammer of Altoona; daughter-in-law, Kimberly Stubbs of Williamsburg; three grandsons: Draven, Damian, and Damon Stubbs; two brothers: James “Andy” and Terry Bookhammer both of Williamsburg; two sisters: Patty Wilson of Bedford and Georgette Strub of Oklahoma.  He is also survived by his former wife and friend Naomi Bookhammer and many nieces and nephews.

He was preceded in death by a son, Donald Eugene Stubbs.

Jerry was a graduate of Williamsburg High School. He served in the United States Navy as a Fireman on the USS Charles R. Ware DD-865 during the Cuban Missel Crisis and the Vietnam War.  Jerry was extremely proud of his navy military service and collected all types of navy memorabilia. He was a member of Bonner-Sollenberger American Legion Post 456, Williamsburg.

He retired as a Waxer from the Fonda Group Inc, Williamsburg with 37 years of service and previously worked at the Martinsburg Shoe Factory. Jerry loved fixing cars and was a skilled mechanic, he enjoyed reading repair manuals and books about automobiles.

Memorial contributions may be given to the funeral home to help defray expenses.

To send flowers to the family or plant a tree in memory of Gerald J. "Jerry" Bookhammer, please visit our floral store.